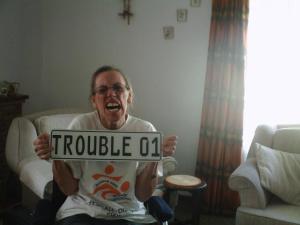 My name is Jenny Symons, but I prefer to call myself “TROUBLE” (a nickname given to me by my parents). I have Cerebral Palsy – a disability resulting from lack of oxygen to the brain in early childhood. In my case, the umbilical cord was wrapped around my neck during a very long labour.

I have had this disABILITY all my life, and there is no “cure” – I have to live with it and make the most of my life. And I have! I’ve won over a hundred medals as a swimmer and field & track athlete, have broken numerous SA records, hold five international medals and have broken two world records. 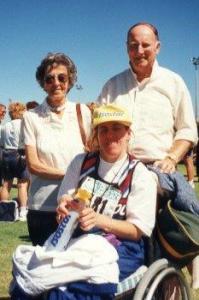 I’ve worked as a public speaker, swum with dolphins, “run” the Argus, done a bungee jump – and whenever I could, I went to concerts & sports events, meeting various famous people like Sir Cliff Richard, John Denver, Air Supply, Bruce Millar, Jeremy Taylor, Kevin Curren, Johan Kriek and Christo van Rensburg, to name but a few. And in 1993 I started doing art. 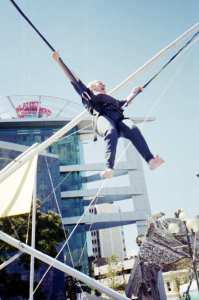 As some of you might know, my parents were amazing people.  They raised me to do anything a “normal” kid would do, looked after me their whole lives and refused to have me put in a home. But in 2008 my mom died, and in 2012 my dad. I miss them terribly every single day. 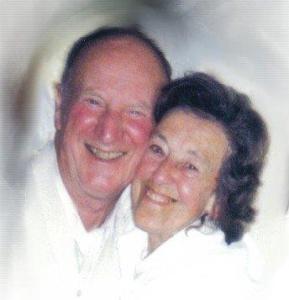 My parents saved as much as they could to provide for me after their deaths, so I could continue living in the house we’d live in together. But at some point,  the dwindling funds forced me to sell. I then lived in a flat looked after by carers for about two years. Then I was forced to move to a home.

You see, Cerebral Palsy is a very, very expensive handicap (check that on google or Wikipedia!)  Under “financial info” you will see a list of my expenses. There are no luxuries – the main expense is the home and medication not covered by the medical fund.

When I moved out of the flat in 2015, I had to go to a facility more than two hours’ drive away from Cape Town and everyone I know. It was the only home that I could get into on short notice that offered the level of care I need. I tried to make the most of things – but it was a hard and lonely time.

Then, in November 2016, there was a vacancy in Parow North in Cape Town. The conditions were much better for me. I could move around more, even get into town, and they offered events (I took part in a wheel chair race) and entertainment for the residents (I even started dancing again, in my wheelchair and standing up!). 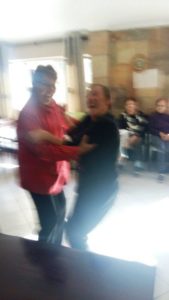 But even though it was in Cape Town, it was more than a 30 minute drive from where my brother and friends live (and the petrol prices made that too expensive for them to visit regularly). So I looked around for something closer to them.

In March 2019, I finally got a vacancy at a home that was in the neighbourhood where I grew up. It was like coming home… Since then, my brother and friends have been able to visit me much more often. And another great thing about this home is that I have my own room.

The only problem is that the expenses brought about by my disability are higher than my long term sponsors (friends and family) can cover.

And so, my friends started a yearly fundraiser  that has kept me going financially. The reason this fundraiser has worked so well, is because we realized that no one person could cover all of my costs, but that if a lot of people contributed small amounts, it would add up. For the past 7 years, it has!

So, if you can contribute anything, no matter how small, it would really make a HUGE difference to my life!

Please write an e-mail to fundraisingfortrouble[at]gmail.com for my banking details.

Under “financial info” you can find out about our exact goals and the financial history of our fundraisers.

And – if you can please pass on this message to as many people you can – that would also really help.

Thank you! God bless!! And stay out of trouble!!!